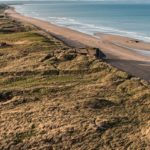 Early in the morning on 6th June 1944, the beaches along the Normandy coast were stormed by 156,000 allied soldiers whose main aim was to take over from the German military. Although they did not take over the city that day, they were able to regain a significant part of control over the land.

By late August, Paris had been liberated, and German surrendered shortly afterward. On D-Day’s anniversary, we take a look at the Canadian British and American landing points that were allied invasion points or Western Europe during world war II.

This is the westernmost of the D-day beaches. It was added to the invasion plans at the last minute, so the allies were at a striking distance. Due to the strong currents, the army landed a mile away from their intended destination. Luckily the area was not well protected, and they were able to penetrate the enemies’ grounds.

Omaha was the bloodiest beach of the D-Day beaches. A rough estimate indicates that 2,400 US troops turned up dead, missing or wounded. The army intelligence had under estimated the number of German troupes in the area.

This one is right in the middle and was stormed by soldiers due to the directions of the sides. While the German soldiers put up a good fight, they were defeated because they did not have many defenses owing to an earlier aerial bombardment.

The Canadian soldiers who landed on this beach were cut down in droves by the German army that was firing from the seaside houses and the bunkers.

Both British and Canadian troops secured the eastern flank. Within minutes they had already taken over the Caen canal area and near river Orne. Airborne troops were over River Dives destroying bridges and keeping the German reinforcements from arriving as their soldiers covered more ground.

Although they were greeted by some fire, they had taken the beach by midday. They did face a lot of resistance from villages and farmyard, and the moved inland. The five D-Day beaches were united on June 12th.